The Government's plan for

With this one sale

You can Kiss Affordability Goodbye

The $245 million sale of the ‘White Spot’ site on West Georgia in Vancouver’s West End is the region’s largest land transaction of 2017.


Their will be no more Small Stores or Small Restaurants Downtown

This is why we must protect tenants and rental housing 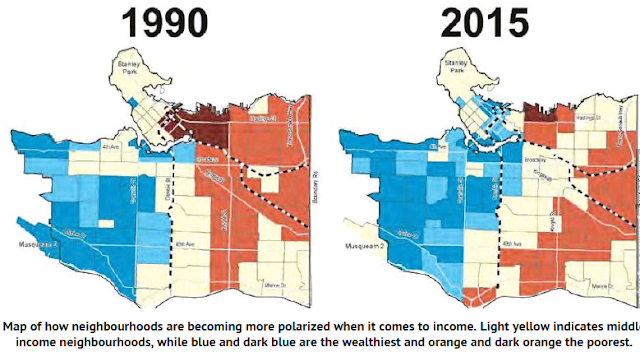 Over the past 30 years, Vancouver’s Westside and downtown have become increasingly wealthier, while the middle class has been pushed further into the Eastside and the poor have been squeezed out of the city
“People are being excluded from specific parts of the region by income,” said David Hulchanski, a professor at the University of Toronto’s Centre for Urban Studies, speaking at a public event in Vancouver on Dec. 1.
“That’s always gone on, but it’s massively going on now. This is a spatial segregation of people.”
Hulchanski is part of a research consortium called the Neighbourhood Change Project, which has created a series of maps showing growing economic inequality in Canadian cities.
Hulchanski was in Vancouver to show the latest iteration of the maps, updated with data from the 2016 census.
The new data shows that the trend continues to worsen, with many large Canadian cities seeing a drop in the number of “middle income” neighbourhoods and an increase in neighbourhoods that are either rich or poor.
Increasing economic inequality is a trend in many developing countries, and is most pronounced in English-speaking countries like the United States, the United Kingdom, New Zealand, Australia and Canada.
Factors include a changing labour market and taxation reforms in the 1980s and 1990s that favoured the wealthy.
Rising inequality is something we should be worried about, Hulchanski said, because research has shown that regions with higher economic inequality have worse outcomes for just about every indicator, from crime to health to political instability.
Vancouver doesn’t have the steepest level of rising inequality:
Calgary has seen the most dramatic change, followed by Toronto.
In fact, Vancouver is the only city to see an increase in the number of middle income neighbourhoods.
But, Hulchanski notes, that’s because low income people “are being pushed out of Vancouver.”
Hulchanski believes the trend shows why it’s important for governments to get involved in housing policy, such as Vancouver’s new housing plan which aims to produce 36,000 new units of housing affordable to people earning less than $80,000 a year.
“Everything I showed you was done by humans, it wasn’t done by an earthquake or flood,” Hulchanski said. “This is public and private power doing these things to the city.
A just city demands that all developments must be in the service of everyone

This is Important for

The law must be changed or not one will rent

Has more Power than the Supreme Court

TENANTS ARE YOU COVERED BY THE LAW?

51% of the People that live in Vancouver are Renters

The Judge will Literally ignore and bend the "Laws "of

The City ,Police, Animal Control and the Fire Department

To render a decision for the Tenants

Why we protect tenants and rental housing

This is a Real case

This Tenant Broke Every Law in the Books

The Landlord also told the Judge

Dismiss the Landlord's application in its entirety .The tenancy shall continue

Notice of a Dispute Resolution Hearing

Dismiss the Landlord's application in its entirety .The tenancy shall continue

All decisions are blinding

The review of Judges decision

The Landlord did not win the review

The Landlord gave Glen another 30 day notice to move

The Landlord Loss
The Judges Decision

This is the Landlords Case

Allowing this garden was probably the worst decision of my Life

The City ,Police ,Animal Control and the Fire Department

Have been here more times than I can count

Often more than once in the same day ... Or night

It's against the law to have a barbecue, fire pit, fireplace or heater outside on the grass

Every year the Fire Department Inspects this building

This is the Fire Code

Because of the noise. Fighting and outrageous drunken parties .

Bark. bare teeth and biting on the average of a few times a day

The Pedestrians and dogs who walk down the back alley

Glen has forced us to put up a Video Camera

So that everything is recorded now

There's only one way to stop Glen

Glen's response to this was to tear out his plants

Then Glen cut down her rose bush in her back yard

The Lady had to call the police on Glen again

He even try's to control who comes down the back alley

Glen chased him down the alley brandishing a shovel

Another man with a pick axe because he didn't want him walking on to 107
property from the alley to her apt.

I'm always getting calls from the City about the dogs

Glen has never tied the dogs up

Glen always tell people they shouldn't come down the alley

Their was blood everywhere ,

Glen was just standing their when Seven attack him twice

Glen and the two dogs are gone

One tenant wrote me telling me

The dogs ran towards a young girl and her mother

The little girl was absolutely terrified and screaming with fear

Then verbally abused him by yelling comments regarding his specified ethnicity

I reported all this to the city animal control

Their are two cases against them

After the court case

The city came and told us their had to be a 4 ft. clear path for fire exit to the street

Because Glen does not want anyone walking on his back yard

We now have a maze build in front of it ,It was build on 106 land

The City ,the Police ,the City and the fire department

4 Someone when through Glen's balcony 4 ft. glass door Glen was arrested

I tried everything to find the leak , I even tore out walls

{ I blamed 105 for watering his garden on his balcony }

Every night after dark Glen waters his garden

Glen put his garden was right up against 105 balcony

When I was fixing the floor in apt 105

One morning their was water all over 105 floor

I rented apt.302 out to Derek J. Mullan Queen's Counsel since 1989
He is Senior Partner of Clark Wilson LLP, and a member of its Construction
Law, Insurance Litigation , Personal Injury and Alternative Dispute Resolution Practice

Derek J. Mullan and his son took me to court

This is what the son told the court

Hurling obscenities and throwing rocks up to 302 balcony

After the police left the Glen and Andrea called the police

Andrea made a false police report she claimed that

The Police arrested Andrea for public mischief and wasting their time

The police wagon was called and Andrea was taken away

She just moved into the building that afternoon

The Andrea actually stole some of the Son's girlfriends clothing ]

Glen will just walks in and takes their Laundry time

Glen will not wait the 15 min's. to see if they are using the machines

The tenants really get mad at Glen and leave notes

I've been here 5 years I can buy what I want

Glen will not tell me what he bought

Glen did tell the judge what he bought

I've been in this building about 20 years

Every day I've been told by the police, courts and every one

Landlords do have rights

I guess I'm to old and mentally ill to think

A Landlord can win a review of a decision


The Landlord did not win

The Landlord gave Glen another 30 day notice to move

Would you rent out your home in BC.

Do you think the Tenant's have to much power

Do you think the Tenant's do not have enough power

Would you put a end to Leases

Do you think the Residential Tenancy Branch should be close down